TiE Hyderabad announced today, Notefynd, a learning platform in which students could share notes and video explanations in their areas of interest and be credited with merit points, as the winner of 2020 TiE Young Entrepreneurs (TYE) Virtual Competition. While the Elevator Pitch was won Do-it-YourSelf written/video tutorial idea of Kraftium, ShoppyCart took away the  3 awards which included the runners up, popular choice and maker faire award.

Over 350 users from various parts of the globe logged in to witness the between 42 participating schools at the 2020 TYE Virtual Finale who showcased their entrepreneurial mettle across B-Plan, Maker Faire and Elevator Pitch rounds. Awards were given away in five categories at the TYE Virtual 2020 Finale, organised by the Hyderabad chapter of The Indus Entrepreneurs on Sunday.

The teams in the competition were divided into seven teams, and given a chance to pitch their ideas to the jury under 10 minutes through a recorded video, followed by a QnA round to a panel of eminent jury comprising Sucheta Mahapatra, (Board Member at IIM Sambalpur, Ex-Country Head at WeWork), Sruthi Kannan (Head, Cisco LaunchPad Startup Accelerator) and Ravi Narayan (Chief Executive Officer, T-Hub & Chief Innovation Officer of Telangana State Innovation Cell).

The people’s choice award was won by Shoppy Cart, an eco-friendly shopping stroller which organizes grocery items into various compartments, preventing product damage, leakage and provides a hassle-free shopping experience, by securing maximum votes in an online voting procedure where the participants of the session and the general public could vote for the team of their choice. Further, ShoppyCart won the Maker Faire Award for their product prototype (selected through demo videos). A record number of 5761 unique votes were polled during this round.

The Elevator pitch was won by Kraftium, a platform that hosts video and written tutorials for DIY (Do-it-Yourself) projects and facilitates purchases of packages comprising material and ensures door-delivery. They were selected based on an online voting system where 228 users had voted ‘live’ during the event. Members of all the winning teams were gifted with books that would help them entrepreneurship on a deeper level.

President of the TiE Hyderabad Chapter, Sridhar Pinnapureddy, (CEO of CtrlS and Cloud4C Services), said “TYE Virtual groomed youngsters on what it takes to start a company, make business plans and successfully execute it. I would encourage youngsters to be entrepreneurs because it is extremely rewarding than any other profession and provides you a lot of satisfaction in facilitating job creation.”

“TYE Virtual initiative has ignited the entrepreneurial spirit among students, practically they learned all the concepts, including the knack of solving real-time problems. Students surprised all of us by their excellent demonstration in running surveys, researching, reaching out to people. We see a great future for them,” the jury panel featuring Sucheta Mahapatra, Sruthi Kannan, and Ravi Narayan had expressed.

TYE Virtual (TiE Young Entrepreneurs for High School students), for the uninitiated, is an annual student entrepreneurship program, aimed to foster the spirit of entrepreneurship at an early age. The students during the program were coached for key business aspects like team bonding, design thinking, rapid prototyping, storytelling in entrepreneurship before the finale.

Medicode, a QR code-card that could host medical information of individuals under one roof, in addition to Rakshak, a device when placed in a car that would generate SOS to the nearest emergency services and family in the event of an accident.

The Rest-O-Watch, a device that keeps one’s vitals in check and raises an alarm to first responders during emergencies besides Food Mentor, a service that helps one cook rare recipes while providing video demonstrations and ingredients for the same, impressed the jury.

Notefynd was declared the Winner of the 2020 TYE Virtual finale organized by TiE Hyderabad. 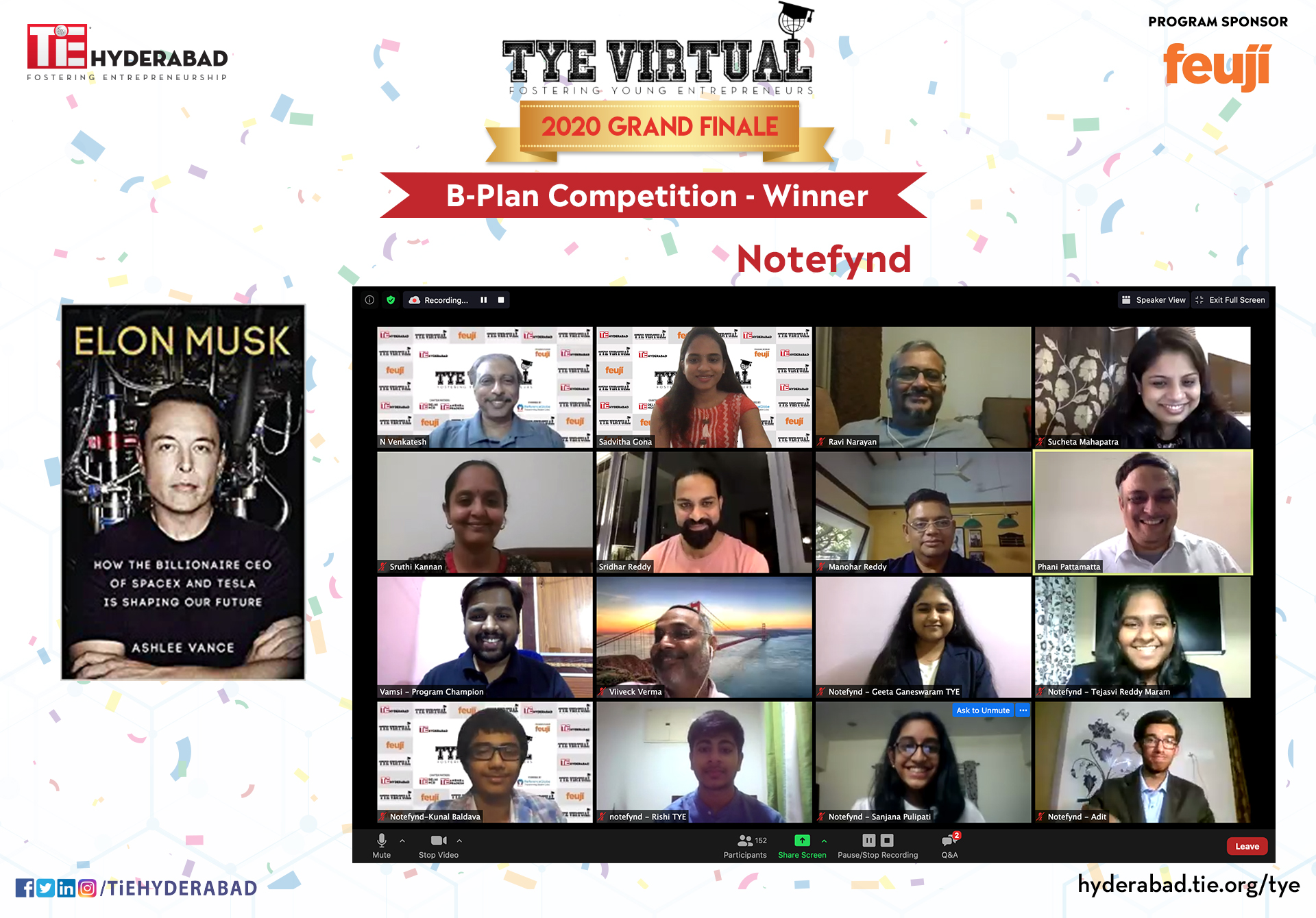