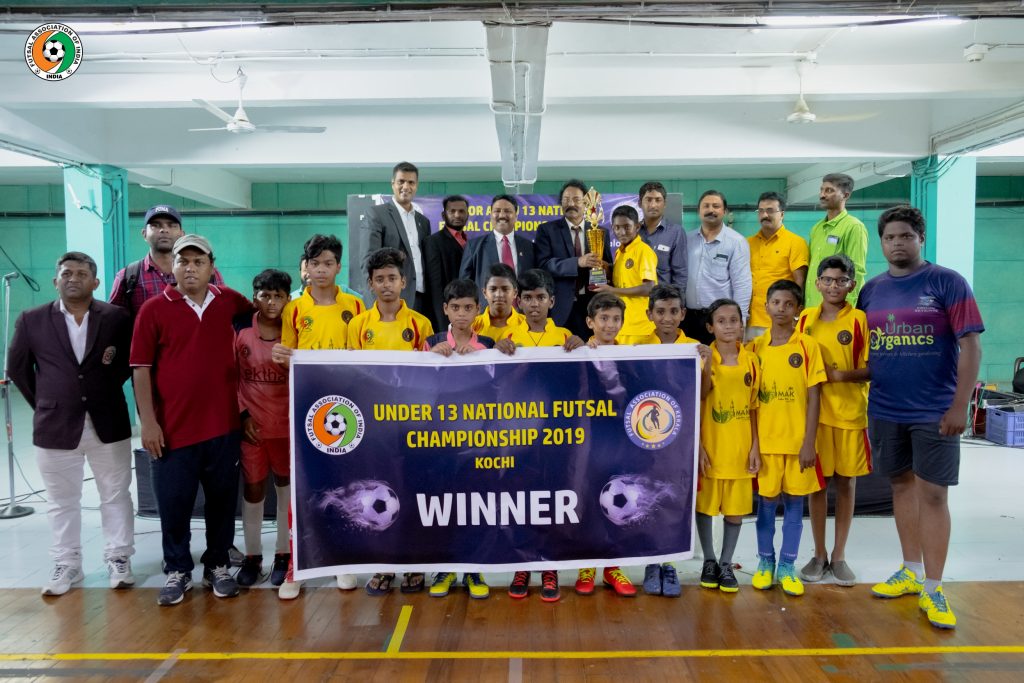 Telangana boys have been crowned champions of the Futsal Under 13 National championship that just concluded at Rajiv Gandhi International Stadium, Kochi. The championship was organized by Futsal Association of India (FAI). Telangana team played like title holders from the first game of the tournament defeating all their opponents.

Telangana Team was in Group A pool which was a group of death. In Group Stages, they fought against Maharashtra in 1st Match by 1-0 goals, scored by V Lokesh. The second match was a draw with Assam. In the 3rd Crucial Match, Telangana team defeated Delhi with 5-1 – Aryan R scored a hattrick followed by one goal each by Akash Pradhan and V Lokesh to Maintain top spot. In final group match, Telangana team won on neighboring state – Andhra Pradesh 3-0 with 2 goals by Kevin Peddi and 1 goal by V Lokesh and went straight into Semi-Finals. In Semi-Finals, the team defeated Gujarat with 3-0. In this crucial game, Jason Powell scored 2 goals and Piyush T P scored one.

The final match was played between Maharashtra and Telangana. There was a cutthroat competition between two teams where Maharashtra took the early lead within the first 5 minutes of the match. After the goal, Telangana fought back and the equalizer goal was scored by Aryan R of Telangana. In a true game spirit, both the teams played hard not letting other team scores eventually leading a tie after full time and had to decide on the Penalty shootout. Telangana Goalkeeper Dhanvi Tej as saved both the penalty kicks by Maharashtra and Telangana converted all the penalties thanks to Lokesh V, Vamshi Krishna,and Pratham Joshi.

Mr. T. Sanjay Reddy President, Telangana State Futsal Association (TFA), congratulated the team on their win and said, “’We are more than happy with performances and results of our team in National level competition. We have won the first championship and this really is a great success having in mind the quality of competitors coming from all the states. All the team members deserve to be praised. They have fought fanatically in each game and each one of them made their own contribution to this great success. This result will surely be a new driving force for Futsal in Telangana”