Why over 80,000 farmers love this Agri-tech platform NaPanta? - Start-Up Hyderabad

Why over 80,000 farmers love this Agri-tech platform NaPanta?

“It was shocking and sad to know that farmers suicide because the dealer compromised to sell adulterated seeds for a mere profit of Rs.300 – 500.” says Naveen the founder of mobile app NaPanta. This led to poor or no crop yield to the farmers.

To boost an agrarian economy like India, farmers need handy and sustainable solutions for better crop yields. Crop yields have influenced the productivity of farms and profitability of farmers. In the last ten years, there is a constant fall in crop yield and an increase in a population that needs to be served. This supply-demand gap leads to several other disappointing effects, one of the major effect being ‘farmer-suicides’. Naveen Kumar V, founder of NaPanta built a solution to undo this trend through their mobile application.

Agriculture Minister Radha Mohan Singh reiterated this situation in a recent parliamentary session, stating that, “These small farms, though operating only on 44% of land under cultivation are the main providers of food and nutritional security to the nation, but have limited access to technology, inputs, credit, capital, and markets.

Farmer, the best contributor turns out to be the poorest in India

A 9.4% of the total suicides in 2015 in the country were a result of farmer suicides, out of which 7 states contributed to the suicides. This number speaks not only about the farmers who were affected directly, but also those who were dependant on farming like the farm cultivators and laborers. Apart from this the Indian farmer story has a much more saddening side to it.

Few reasons for such a sad state of affairs is because of adulterated seeds, poor supply chain and storage capabilities and lack of sustainable agricultural practices.

NaPanta, a mobile application with real-time and personalized information

Having spotted that timely and personalized information can help a farmer from losing his life, Naveen Kumar V and his team has built a solution using a mobile application that provides personalized information to the subscribed farmer. NaPanta, the free mobile application for farmers, comprises of information pertaining to crop management techniques, fertilizers, pesticides, insecticides, 5-day weather forecast, daily market prices of 300+ commodities about 3500+ markets in India, soil testing laboratories, crop insurance, cold storage and related agri dealer information in a specific location. Some of these features are also available to the farmer without an internet connection.

As of today, NaPanta boasts a community of over 80,000 farmers across Telangana and Andhra Pradesh on its mobile platform. Naveen shares happily, “We were able to add value to these farmers and onboard them in just 2 months.” The interface is developed in Telugu, the common regional language of the two states.

This mobile application facilitates farmers to track their expenses which is otherwise unorganized both for the farmer and the market. With the information inputs that the farmer (user) provides, the application gives back intelligently analyzed information about the appropriate pesticide to be used as per the age of crop. They aim to use this data to further analyze and aid the farm product manufacturers with real-time information. This would be one of the major sources of revenue for the business.

More about NaPanta and their milestones

The team of NaPanta aims to build intelligent information that will be further offered to agri input providers. This real-time information would help manufacturers build better products for farmers, which further helps in better crop yield and reduction in farmer suicides.

Naveen shares the recent episode where chilly produce by farmers was rejected on a large scale, “The farmers have to sell their produce at Rs.1500 per tonne instead of Rs. 6000 per tonne which was the market price. If the government could have provided calculated projections about demand and supply, both to the farmer and the market authorities, this debacle could have been avoided. ”

With the inputs and expenditure data that the farmer provides on Na Panta, Naveen claims a 95% accuracy of farm output hence, allowing them to provide advisory services to both the farmer and the government about the gaps between farm output vs input.

NaPanta as an agri-tech startup has been incubating with AIP-ICRISAT and IIIT-Hyderabad. The team has touched upon helping farmers at the district and mandal levels. Now, they want to also start focussing on the farmers at the village-level through a large-scale training and know-how program.

NaPanta is actively seeking seed investments to build a volunteer program where over 50,000 local volunteers would be trained and educated to further support farmers at remote villages with the use of technology and make most of it. With this, they intend to onboard and help as many farmers as possible.

Other interesting trends that the app would capture in the near future would not only be about fertilizer-promoted farming, but also the organic and natural methods of farming.

By adding features to the mobile app and bringing everything that a farmer needs onto one screen, the team has achieved to bring down research time and effort for a farmer. This helps the farmer to avoid multiple cycles and destinations of information.

Naveen and his team have taller dreams and a greater mission to fulfill. To achieve those, they are actively seeking support within and beyond the farmer and agricultural communities. Should you be someone who would love to be a part of their endeavor, feel free to reach out through their website – www.napanta.com 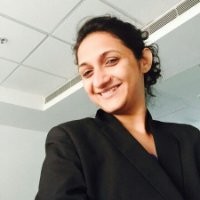 Digital and Neuro marketing consultant working with startups and investors. A short two week introspection after my last stint has precipitated my limitations and helped me manifest a new avatar, the marketing maniac. www.nischalagnihotri.com