When Ask had to ask??!! - A postmortem on Ask.com - Start-Up Hyderabad

You think its light that you see at the end of the tunnel, you reach for it, and you run towards it and BAM!! It’s light alright from a train that’s speeding right towards you!! Something akin is the scenario with our search engine “Ask.com”.

Ask.com originally Ask Jeeves, was an aspiring tool engine set out to answer questions posed in natural language and as well traditional keyword searching , later taking on the path of search engine , then an algorithm search provider , then Ask 3D , a PPC BID platform ??!! What started as an initiative with a profitable albeit noble cause, ended with a search engine undergoing an identity crisis!Following are my dissections of Ask’s demise as a search engine in 2010.

Ask.com had a great technological outbreak, with its innovative outlook and dimensions to make it advanced per se as compared to its competitors (Ask 3D, Ask ad campaigns, Ask PPC BI platform). Impressive? Yes. Accessible? No. Reaching out to only a few segment of the population, it carved itself a niche segment with loyal consumers which eventually faded out.

Upon hearing “Ask.com”, it rang a bell in my head. And it struck me , yeah that pesky little search engine more like malware that forced itself into my default search website and as a toolbar ,upon some legitimate software installations. And unfortunately, it is the general perception of people who had faced a similar scenario.  As it cannot be easily removed by using built-in uninstall features, it proved more to be a nuisance rather than a prayer answered.

I refrain from calling Ask.com as outdated. It had innovations, it had changes. Maybe it was a little too ahead of its time or maybe a little too late. Some that a little too late to follow. But in all, ask.com had packages (cited above) that consisted the favorable packages bound in a disguise of such complexities, that its appeal was turned off. Its current scenario as just a Q&A engine also calls out for more improvisation. The whole objective is lost, when a query firstly leads you to more queries and secondly the queries leads you to other search engines for the answer (cited below). 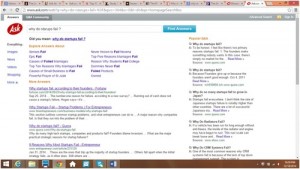 For starters, a good market research could have sold 50% of the problem, Ask.com with its mission intact lost its way in the vision process. With the ever changing and overtly simplified technological era, Ask.com, in my opinion was a little suicidal with its savvy yet complex access especially considering the competitors (Ex. Google) that never had to look back from whence the journey began.

A startup or for that matter even an established company meets its demise, when its idea is not backed by ample research , a well supporting team , of course the financial backup , a well charted but also a flexible approach , long term vision , an effective leader etc.

There may be quite some cases of failure startups but it’s a true reflection on the successes of enterprises when lessons are learnt from the failures. With many ideas and talent so abundant, a postmortem is an introspection rather than a discouragement. 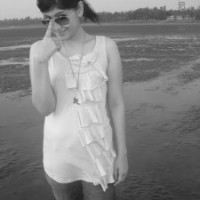