What exactly is blockchain technology?

The blockchain is hands down an undebatable ingenious formulation to jointly manage the bitcoin transactions. This technology allows digital information to be disrupted but not copied. The blockchain technology has created the backbone for a new type of internet and is an incorruptible digital ledger of economic transactions that can be programmed to record not just financial transactions but virtually everything and anything of value. In the simplest of words, it is a time-stamped series of immutable record of data that is generally managed by a cluster of companies, not owned by a single entity. Each of these blocks of data (i.e. block) are secured and bound to each other using cryptographic principles (i.e. chain). The blockchain network has no central authority — it is the very definition of a democratized system and since it is a shared and immutable ledger, the information in it is open for anyone and everyone to see.

So is Blockchain Technology the New Internet? Find out more about blockchain technology in an interactive session with Relex Development, Birthvenue, and InQ Innovations at T-Hub, IIIT-Hyderabad campus where highly qualified professionals will discuss how blockchain technology can put Telangana’s economy on a rocket ship. 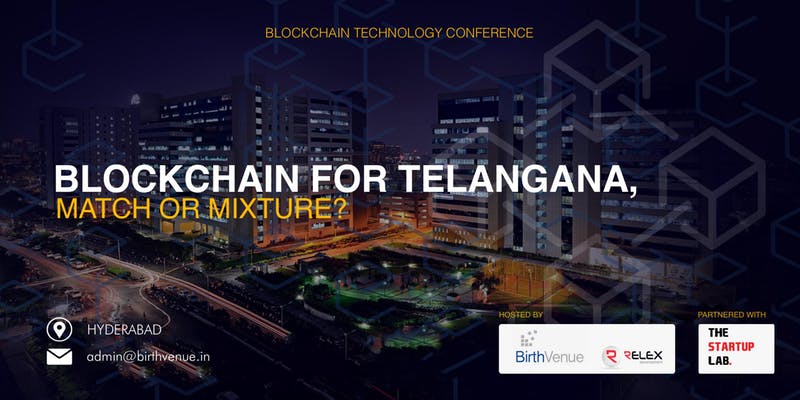 Speakers for the event include:

Keith Hilden, CEO of Relex Development. A Bitcoin veteran from 2011, and a frontier market finance professional that possesses deep experience. He has worked over the years to deepen investment ties between developing markets in Asia and North America.

Andrea Romaoli Garcia is an Ambassador appointed by the United Nations against hunger and poverty, and Director by Internet Society Chapter New York. Her other roles include Expert Advisor to Relex Development- Chicago, Council to Special Projects at Gerson Lehrman Group ­‐ New York, and an experienced International Tax Lawyer expert in Blockchain Technology and Smart Economy- Brazil, Switzerland, Africa, and the United States.

Rohit Taneja, Founder & Director of Birthvenue. A visionary serial entrepreneur equipped with professional expertise in the domains of Blockchain, digital payments, and sustainability. BirthVenue has analyzed the implications of blockchain in real estate in a two-part series, “Real estate on Blockchain” and “Blockchain and the ownership game.”

Gokul Alex, Director at PwC. A well-known contributor to the global blockchain ecosystem as the ambassador for Hashgraph and ZCash. He is also an advisor to multiple Startups, Funds, Communities, Governmental and Non-Governmental Organisations, Social Networks, Regulatory Bodies, and Business Consortiums.

Sharat Chandra, President of Bangalore Chapter at Government Blockchain Association. An experienced leader who is also an Author, Blockchain Speaker, Consultant, Trainer, ICO Advisor, and Digital Marketer with rich cross-functional experience in US Healthcare, Financial Services and IT.

Kashyap Kompella, Founder of Edwisely. Being one of the early entrants in blockchain technology in Hyderabad and India, he is also the city head for Blockchain India and Startup Grind, among his other professional associations.