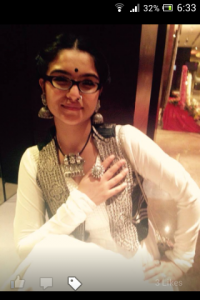 Remember  Band Baaja Baraat ? remember Anushka Sharma ? of course you do . The motivated girl on roller blades all set to establish her own company ” Shaadi mubarak ”  . The magnificent sets , the beautiful curtain , drapes,cushions , the flowers , the shehnaai , the ambiance , a well lit 5 star heritage hotel  . Looks like living a dream ? For someone like Chetna Arora the dream has just come true .

I remember explicitly of the first day when I met her , we were sitting in one of the best places of our college , the
cafeteria . she was a little upset , I thought probably she was homesick since that was our first week of first year engineering . Later I could not hold my inquisitiveness and asked her ” whats the matter man ?” ..and she said ” I wanted to be a fashion designer and not an engineer”  . Eight eight pointers , few interior decoration projects and a lot of creative work later that girl is now the Anushka Sharma of her own ” Brahma Tatva” . Needless to say that she is a born artist or a self taught artist as what she likes to be known as .

The unexpected Start
Like most of us chetna did not take up a fancy corporate job , Her ambitions were personal and self valued .She went  to Bangalore to startup in the food and catering space . Tried hard for the funds but as most of us failed but dint stop . She moves to Delhi, she was spending her summers with her sister in Delhi , who is an established interior designer herself and suddenly gets a ring to help their high profile neighbors for their wedding . With one opportunity and thousand ideas in the heart ,they begun their work of re-scaling the venue . Their first project turned out to be a great success and since then they haven’t looked back . Their first years revenue was good 14lakh INR . They then founded and Named the Company ” Brahma Tatva ”  retouching your favorite moments to last long and beautiful . 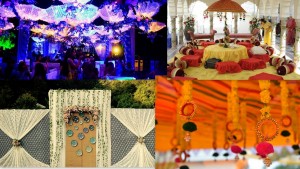 Vodka and the Payback
There is one thing all new business known to have struggled with is the operating cycle , the problem of credit and the clients refusing to payback . When our BBB  girl first asked her clients for the fee , they refused and gave only half the money . After rounds of followups, Chetna finally decides for a deadly cold Call , She
picked up a  vodka – cheers – bottoms up and rushed straight to the clients own home . An hour of Heavy headed and heated discussions later she finally received her first Payment , The first income of her own startup the ” Brhama-Tatva ” .

Exciting as it may sound and mesmerizing as it may look has a never ending struggle and hard work behind . The sleepless nights for the next day sangeet function , Preparing the stage look ,colouring lamps , Personally hand crafting the diyas , giving an eclectic taste to the drapes , seasoning  the beauty around inst a work less embroiling .

Now and Future
At the moment Brhama Tatva has only 2 employees , Chetna and her sister but that’s how startups begin right ! They want to be pioneers in the theme based interior redesigning and remodeling space. She plans to take it to an organizational level and we at startup Hyderabad wishes her all the best !!