Of Hindi Tales: From Texas to Telangana - Start-Up Hyderabad

Of Hindi Tales: From Texas to Telangana

From building algorithms that model Hindi-English speech to climbing rocks at Khajaguda, this Fulbright-Nehru scholar has not only successfully completed her research project but also enjoyed her exposure to India’s kaleidoscopic diversity during her 9-month long tenure at IIIT-H. Before she waves alavida in May, we catch up with her and ask her about her experiences so far. In conversation with Kelsey Taylor Ball.

When 23-year-old Kelsey Ball came to Hyderabad as a Teaching Assistant last Summer, she knew it wasn’t going to be her last time. The Teaching Assistantship was part of a study abroad programme that brought students from the University of Texas at Austin to IIT Hyderabad, “The experience made me curious about India. I wanted to come back and spend more time here, “ she says. After graduating with B.S. in Electrical and Computer Engineering in May 2017, Kelsey says that she wanted to try doing research full-time without committing to a full graduate degree program. 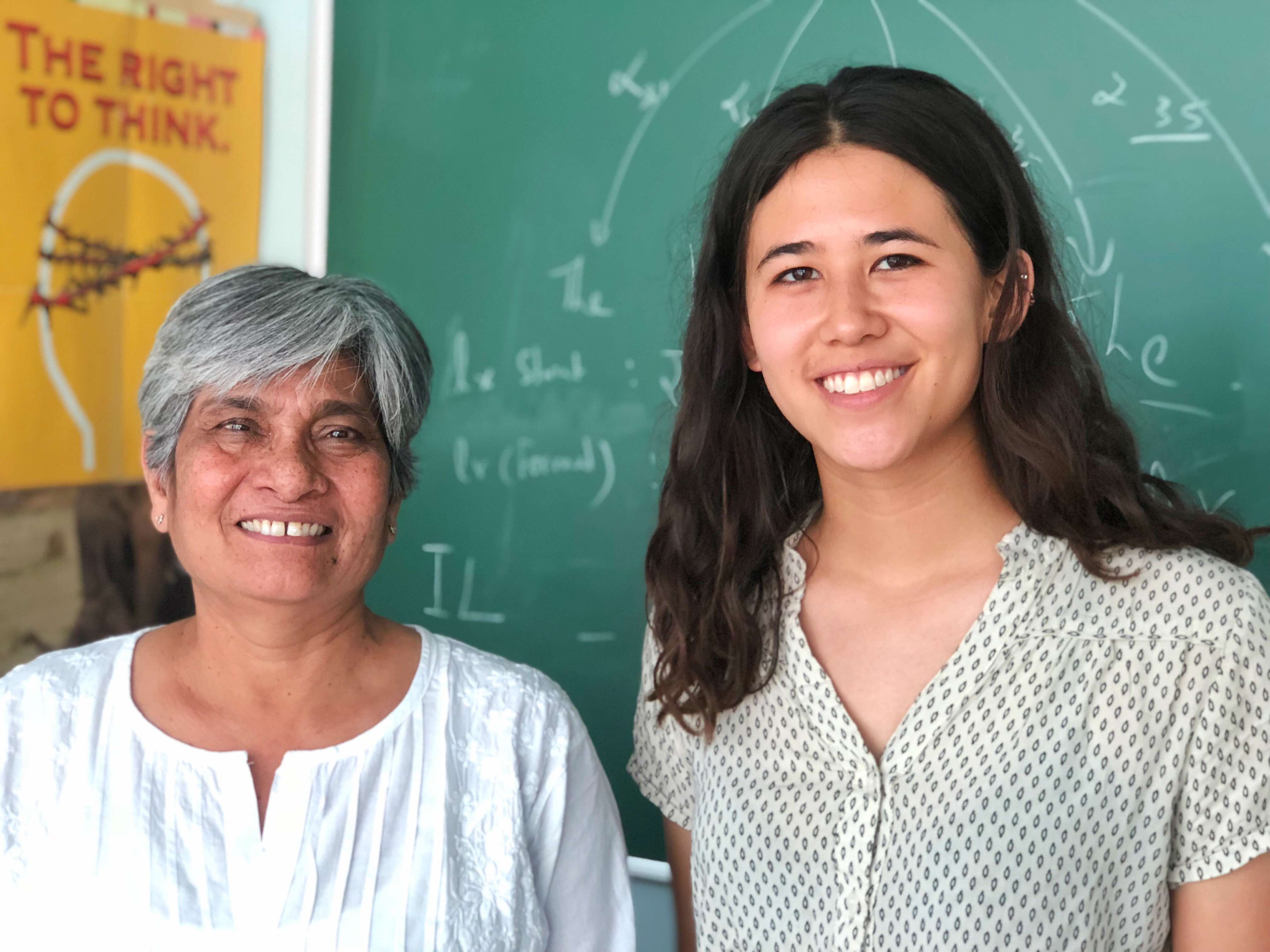 Kelsey explains that the Fulbright-Nehru student research grant is typically awarded to graduating bachelor’s students for research projects between 6 months to a year in duration. Applicants design their own projects and even identify appropriate host institutions for their projects. “I had already done some research in computational linguistics and code-switching in particular, and because I had some contacts in Hyderabad, the Language Technology Research Centre (LTRC) at IIIT-H was a good fit for my application,” she says.

Broadly speaking, Kelsey’s research in the LTRC lab aims to improve human language technology in Indian contexts. “India is a pretty cool linguistic environment because most people are multilingual to some degree. People often switch back and forth between different languages within a conversation, or even within a sentence – a phenomenon linguists call “code-mixing” or “code-switching”. In the LTRC we’re building algorithms that better model this kind of linguistic behavior.” Kelsey’s work focuses on automatically identifying the part-of-speech of a word in code-mixed text, which can be a useful bit of information for higher-level language systems like Siri/Alexa, search engines, etc. “I work on Hindi-English code-mixing because I’m more familiar with Hindi than any other Indic language (but not by much). I can read and write Hindi – it’s not very essential to my work, but I think it’s pretty fun.”

For Kelsey, the process of learning Hindi began back in Texas. She enrolled in a class and spent around 2 months grappling with it.  “Since coming here in August 2017, I can now follow a bit more Hindi than I used to, but I still can’t speak it very well. People laugh because my Hindi is pretty book-ish and formal. The only person I’ve met who speaks the kind of textbook Hindi that I learned is my guide, Dipti ma’am. By contrast, when I first came, I couldn’t even recognize the colloquial Hindi that I heard students speaking. Textbooks only go so far!”

Kelsey’s project titled Exploring Computational Methods for Parsing Code-Mixed Hindi-English is almost complete. Since the scholarship involves independent study or research, she says that nothing in particular happens in the end. In February 2018, Fulbright held a conference in New Delhi for all the scholars in India to present their research. “It was fun to share my work and see what the other scholars have been up to. At the end of May, I’ll submit my work to EMNLP, an international conference in natural language processing, but we’ll have to see if it gets published,” says Kelsey.

Time away from home

Kelsey admits that her time here has been filled with ups and downs. “The hardest parts of my grant were periods of loneliness, homesickness, or frustration with doing research, but I got to learn a lot about myself in the process. I really enjoyed getting to travel and meet people from different parts of the country. Despite huge differences in regional cultures, they seem to be unified in strong expressions of hospitality and interdependency.”

Since she’s a rock climber and likes to climb rocks, she says that one of her favorite parts of living here has been getting to know the local climbing community. “I spent a lot of time in the boulders at Khajaguda, and made some really good friends there. I’m more and more convinced that climbers everywhere are pretty much the same.”

Kelsey counts herself as lucky to have done research at IIIT-H because “It’s a great place to live and work. The trees and murals make it really nice to go for a walk whenever I’m stuck on a problem, and I can’t speak highly enough about the food.” Another plus she says is the fact that there are always interesting talks and conferences going on. “My favorite was the one I attended a few weeks after I arrived: T.M. Krishna gave a really thoughtful talk about the role of privacy in art-making and performance.” She’s also impressed about how much the university appreciates and invests in the humanities, despite being a tech-focused institute. “Another great thing about being at IIIT-H is that there are students here from all over India, which helped me learn about how diverse the country is.”

Kelsey remarks that the university is, in some ways, so cosmopolitan that it softened most of her culture shocks and limited her exposure to traditional cultures. While it made her overall experience really comfortable, she admits that she sometimes envied other Fulbright scholars whose research demanded fieldwork in remote areas. “Although they struggled with language and cultural barriers in a way that I didn’t quite have to, those scholars also experienced a kind of immersion that I was only able to sample via short-term travel.”

Kelsey acknowledges that she couldn’t have done her research without the support of Dr. Dipti Sharma and Dr. Manish Shrivastava, who checked in on her, helped her get the resources she needed and brainstormed with her when she got stuck. “Dipti ma’am even invited me to her home for Diwali, and lets me use her electric kettle every day to make coffee”, exclaims Kelsey. She goes on to say that so many of her peers went out of their way to help out. “It’s impossible to name just one.” From close friends who’ve helped in getting her settled in the hostel, to those who’ve mentored in her research, from those who’ve helped in configuring internet access to those sharing a mutual interest in the outdoors, she says the list could go on for quite a while.”There are so many people who have helped me out.”

“I’d like to take a break first!”, she laughs. She was initially interested and keen on an exposure to research. “…(now) I’ll probably get into the industry”, she trails off.

Well, hope you had a great time here and hope to see you soon!