iB-Cricket: An Indian Innovation is all set to revolutionize the world of cricket

iB-Cricket: An Indian Innovation is all set to revolutionize the world of cricket

iB Cricket: A revolutionizing Vsport, an e-sport in Virtual Reality helps you play cricket in international stadiums, compete globally, build your iB Cricket career and much more, right from your home or iB Cricket Arcades. 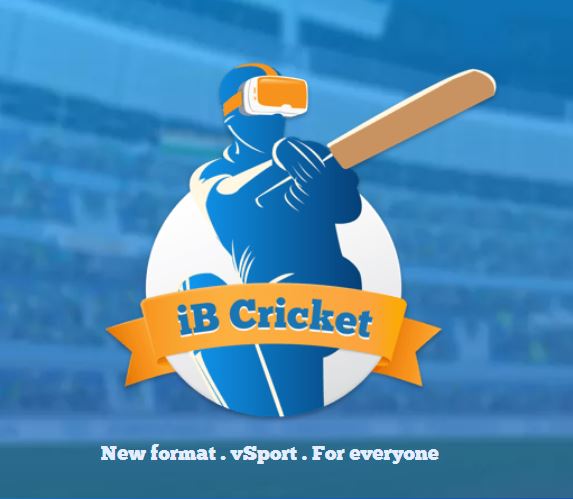 Cricket and Bollywood are the two things that really bring this nation together. However, Cricket does it better because it is a universal language. It does not require you to know a particular language to appreciate the strokes of a batsman or the deliveries of a bowler. It unites people more than anything.

Even though Cricket is an Invention of English colonies, Indian colonies adapted cricket more than any other country in the world.Over the years cricket has incorporated into the game where only a few of the latest technological advances available.LED bails, Spidercam, Hawkeye were able to support the gaming and judging easier. But its just a dream for many Indians, in fact, every cricket lover for that matter to experience the field, cheering crowd and strike the bat in the International stadium. Even it takes years of hard work and luck to experience that one-time life cherishing moment.

A crazy thought to provide that kind of an experience to everyone and help the people to be trained with technology has given birth to a new technology innovation called ” iB-Cricket “.If you are a follower of Virender Sehwag on twitter, the maverick opener tweeted about this new form of cricket as the Hon’ble President of India Shri Ram Nath Kovind, played the first ball of iB Cricket, which is going to be released worldwide in April 2018. 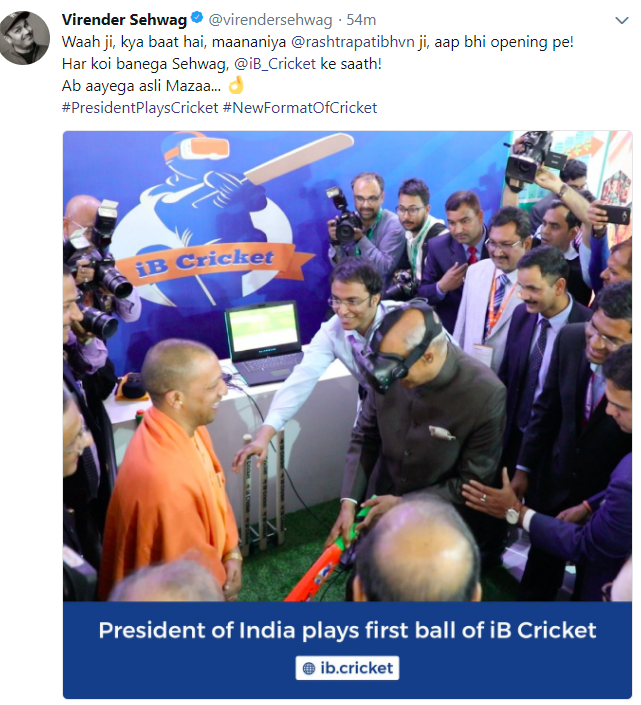 iB Cricket , a revolutionary Virtual Reality Cricket Sport (vSport), developed byProYuga Advanced Technologies was launched in the presence of the Hon’ble President of India Shri Ram Nath Kovind. The custom-made electronic bat used in the game was unveiled in the presence of Union Minister Shri Ravi Shankar Prasad, Electronics and IT minister of India who appreciated the team for their exemplary work. This unique format of cricket has gained everyone’s attention at the UP Investors’ Summit 2018 on Thursday.

Prominent dignitaries such as Shri Arun Jaitley – Finance Minister, Shri Yogi Adityanath –
CM of Uttar Pradesh and others also witnessed iB Cricket.With a vibrant team of IIT, IIM and ISB Graduates, ProYuga is set out to make India a worldleader in Advanced Technologies. The founder of Proyuga, Vasanth is an alumnus of IIIT Hyderabad and Trivikram, CEO of the company, is an alumnus of IIT Delhi. Notably, Trivikram has previously turned down a job offer of more than INR 1 crore by a reputedMNC prior to co-founding ProYuga.

“The landscape of eSports and VR is experiencing a transformation. ProYuga is at the forefront of this change and ahead of the global market. It is overwhelming to witness the unparalleled commitment shown by UP Govt & iB Hubs towards nurturing a robust and vibrant startup ecosystem”, says Mr. Trivikram Reddy, CEO ProYuga Advanced Technologies.

The product iB Cricket is well aligned with PM Modi’s vision to facilitate home-grown
companies and make India a hub for major businesses. The Make in India and Startup India
initiatives have encouraged startups like ProYuga to build their products in India and
strengthen the Indian economy.

IBC is considered the most immersive VR Cricket experience according to people who have
experienced it across the world. It aims to benefit over one lakh members by opening
25,000 franchises across India.iB Cricket is gearing up for its worldwide release in April 2018. “We plan to have a simultaneous launch of the product in 25 different countries. We are highly positive about its potential and are sure that it will be played and enjoyed by a large audience globally” Trivikram added.

ProYuga is being supported end-to-end by iB Hubs, a PAN India Startup Hub which was
launched in November 2016 by Shri Amitabh Kant, CEO of NITI Aayog.
Ms. Alekhya, CEO iB Hubs quoted that “We are very happy to support young startups like
ProYuga to come up with world-class innovations. In the future as well, iB Hubs will assist
such committed startups and we are confident that with the system developed by iB Hubs,
Indian startups can expand globally within six months.” 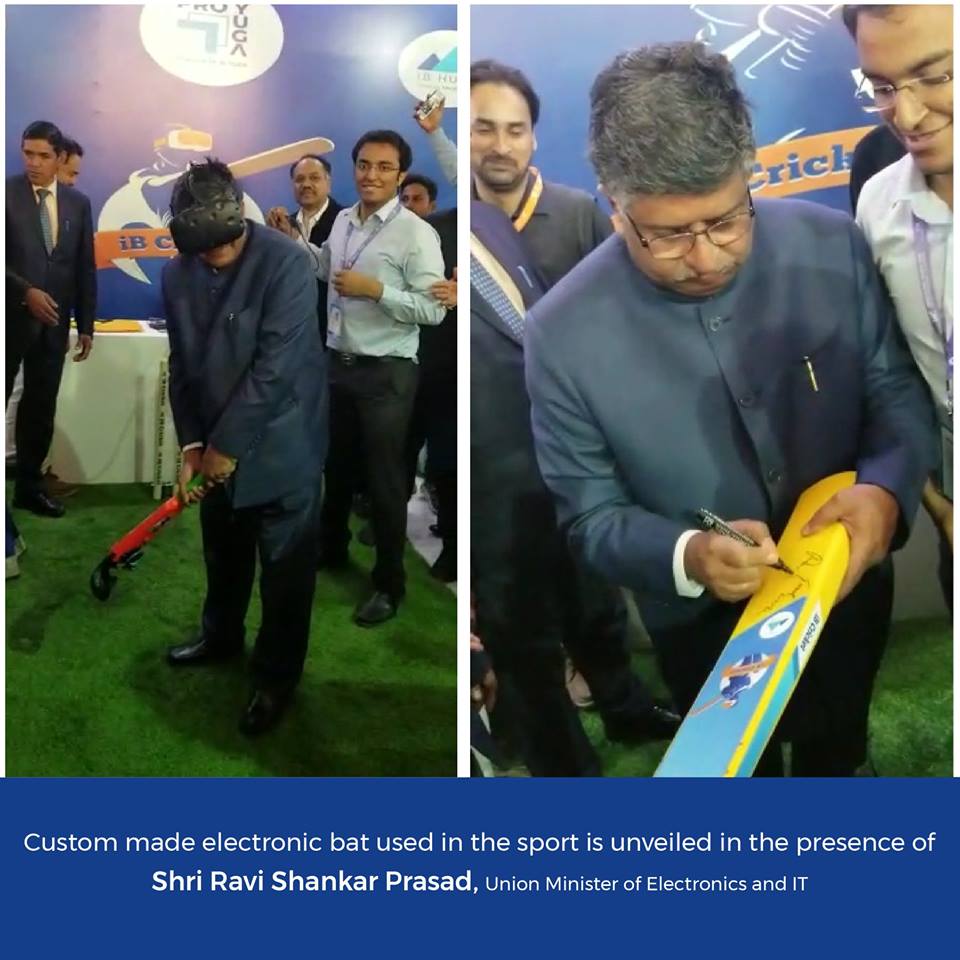 He signed and unveiled the custom made electronic bat used in the sport.
He appreciated the team for their exemplary work and also called other ministers to
experience the sport. 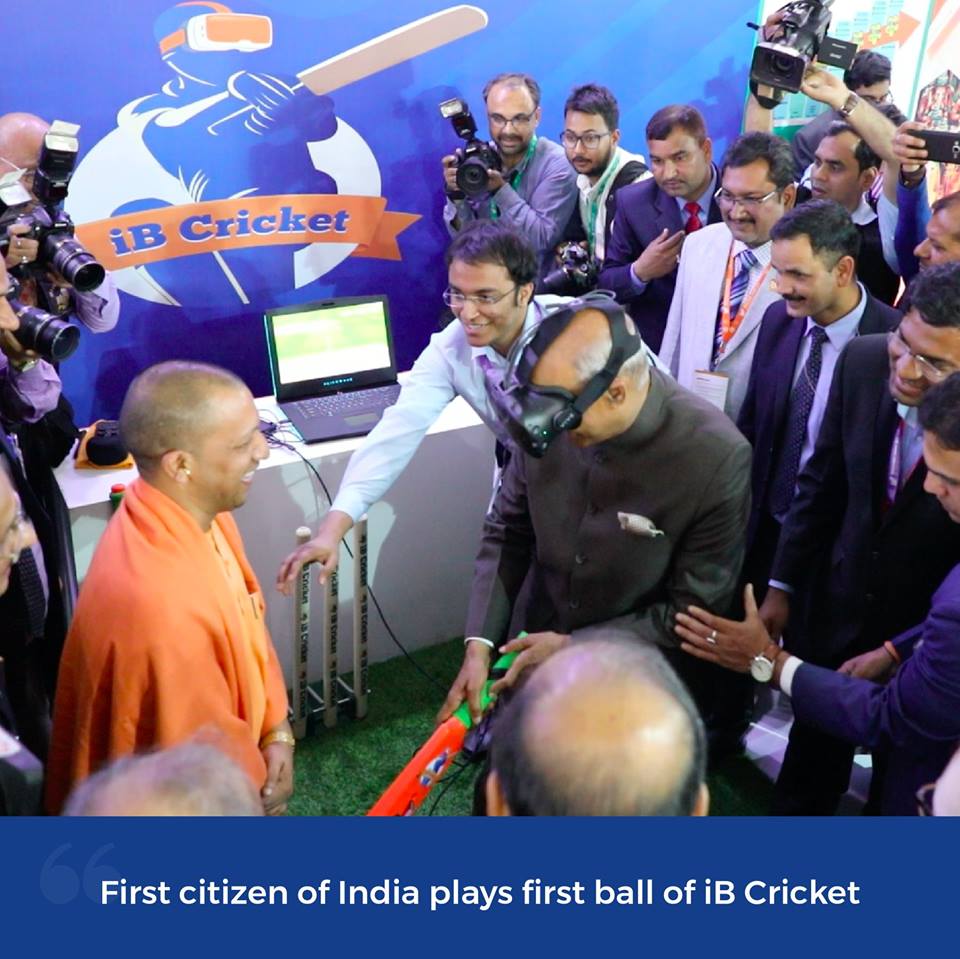 I know you were quite excited to try this right away!! Just two more months for a world wide release , by then subscribe for iB-Cricket @ https://ib.cricket/ and also get a chance to win exciting prizes by supporting this innovative startup.

iB Group is an ideation and mentoring group that aims to accelerate the progress of society through initiatives that address the root causes of the pressing problems in society.iB Group encourages youth to undertake such initiatives and mentors them while carrying out these initiatives.

An Innovative Startup supported by iB-Hubs to build and help other to build their own products. They have various service offering to the organisations and companies to set up their own AR/VR environment and improvise the existing systems to digital technologies.More…

Visit iB-Cricket and get a chance to experience it before anyone else!!