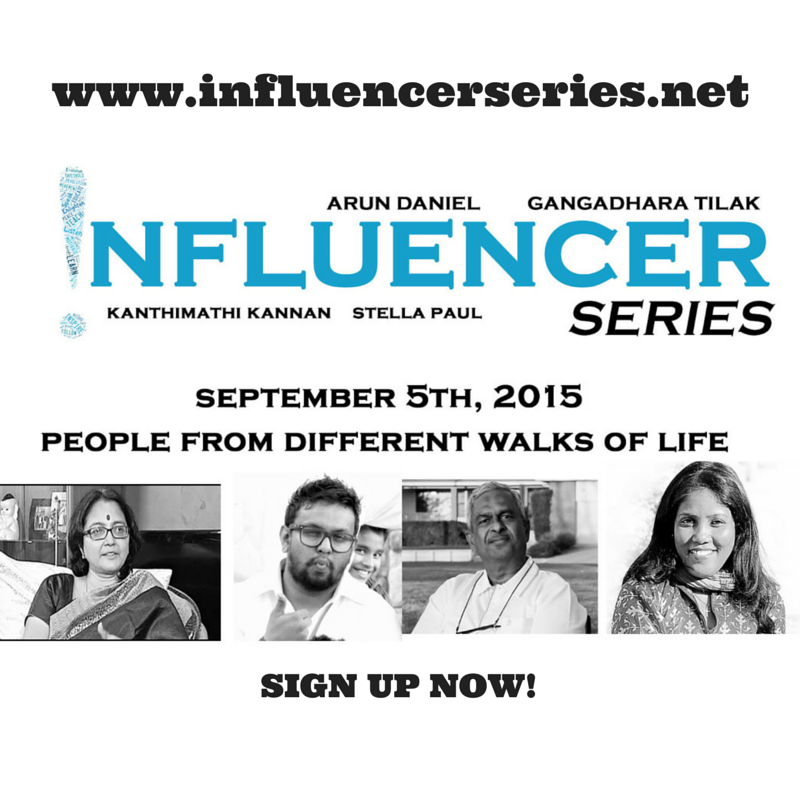 Life is a rat race and you might lose direction easily in this universal chaos. People around the world are trying to find ways to achieve happiness and a sense of purpose in their day to day lives. We all think we are normal human beings who cannot accept change or create change. But, that is so untrue and far from the reality. There is a superhero in all of us. INFLUCENCER SERIES aims to identify these unsung heroes in the recesses of society and bring them to the forefront by engaging them with a larger crowd and speak about their experiences. On the other side, it is an opportunity for us normal beings to become someone greater by getting truly inspired by such superheroes!

The INFLUENCER SERIES is a concept initiated by Co.Lab.Orate, Hyderabad’s first community coworking space. Co.Lab.Orate is a prime stakeholder in the Hyderabad startup and intellectual communities and aims to further such initiatives for the greater good of society. The idea of this series sprang up when the founders came across many articles that talked about people who were giving back a lot to society and expecting nothing in return. They felt such people needed a platform to inspire more people and that’s how the INFLUENCER SERIES took birth. They think listening to experiences from influencers will give you a new approach to life and probably you could turn out to be an influencer in the future too! That is the objective.

The first edition of the INFLUENCER SERIES is being held at Alliance Francaise of Hyderabad on September 5th, 2015 from 4PM to 7PM. Some prominent speakers are turning up to make this event a grand success:

Arun Daniel – He started his careers as a delivery boy for Dominos Pizza and is now a corportate communications & marketing manager. He has founded an NGO in 2012 called ‘YOUNGISTAAN FOUNDATION INDIA’. The foundation cooks and feeds hot and healthy food to the homeless and poor.

Gangadhara Tilak – A retired railways engineer and founder of ‘SHRAMADAAN‘ foundation. He founded the entity to repair abysmal state of roads in the city. He has filled over 1125 potholes with his own money till now. He is not a regular man but one on a mission to fill every dangerous and lifetaking pothole out there and making our roads safer to commute on.

Stella Paul – She is journalist with 10 years of reporting experience on environment and development, an acclaimed and passionate writer, she has bagged the ‘ALL INDIA ENVIRONMENTAL JOURNALISM‘ award in 2014 and ‘ASIAN ENVIRONMENTAL JOURNALISM AWARD‘ in 2013. She has also been conferred the PRESS FELLOWSHIP by the UNITED NATIONS. A person who proves that the pen is mightier than the sword.