Writing is a way of expressing inner thoughts and beliefs. Fiction stories and novels have been one of the most intimate style of writing. From teenagers to adults, most of the avid readers prefer at least one book in the fiction genre. Such storytelling allows people to run their imagination far beyond what it is with the author’s way of conveying the story.

But, not all writers can get their stories published. These writers end up publishing on blogs where they reach out to a limited number of enthusiasts.  Such wonderful stories and writers could not reach a large audience until ‘Kahaniya’ came in.

Kahaniya is an effort to reinvigorate regional language fiction. In recent times, English has been the prime consumption in terms of digital communication and storytelling. Now, with Kahaniya, the team is focusing on altering the scenario by building a platform dedicated primarily to regional language fiction. To accommodate the brevity needs of the current generation, Kahaniya has been tailored to focus on short fiction, stories/poems that can be consumed in less than 15 minutes.

When we asked Pallav, the co-founder, about the idea behind Kahaniya, he shared an incident when Devendar Gona, one of the other founders and an avid reader started searching the Internet to read Telugu fiction and came across wonderful writers/bloggers who had beautiful short stories to their name. However, these writers were virtually unknown and their stories reached a handful of people. Given the meteoric rise of regional language apps like DailyHunt, the team realized that a lot of people are consuming in regional languages, the only problem being that there was no platform connecting the readers with writers and vice-versa. That’s how Kahaniya came to be.

Today, they have some of the best writers from across generations in the Telugu genre. Modern writers like Sri Ramana and Khadir Babu are a part of Kahaniya, taking further the legacy of regional storytelling. 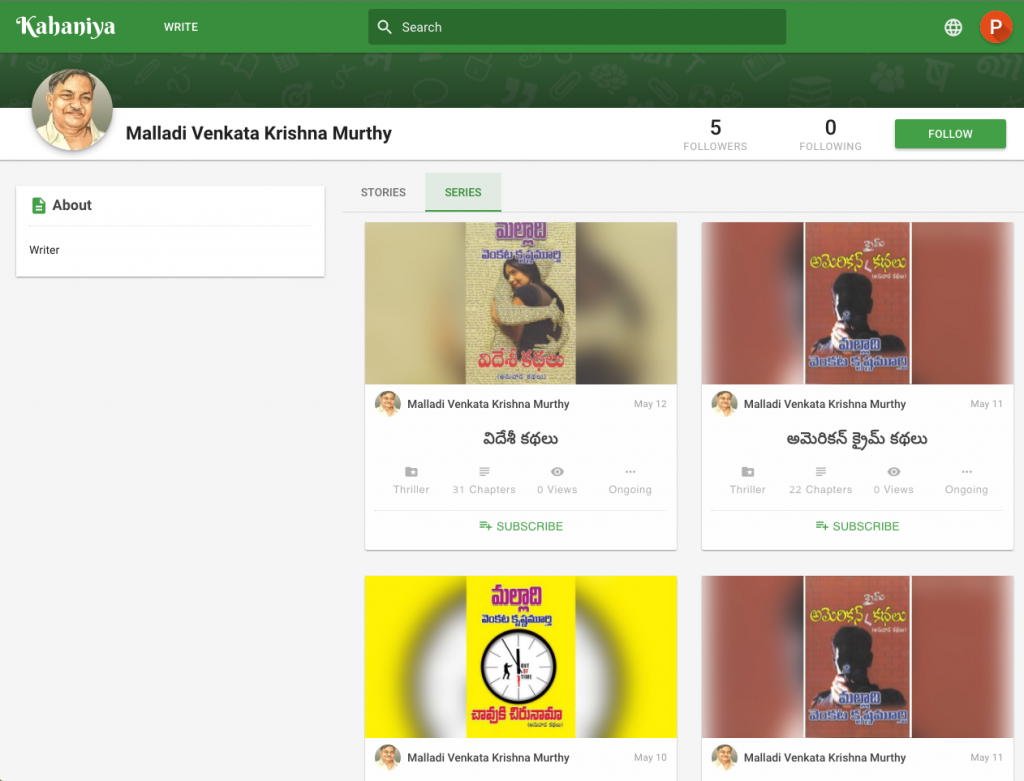 Devendar, the brain behind Kahaniya, when discussed the idea with his team SaddaHaq, they instantly nodded to come up with a platform to connect readers and writers. A team of school friends, after parting ways for graduation, they came together in 2012, to start SaddaHaq and now they co-own Kahaniya as well.

The team consists of –

Together, they have over 30 years of experience building technology driven products.

If you love reading, Kahaniya is the place to discover and read the best short fiction in your regional language. You as a reader get a chance to connect directly with your favourite writers. With the Android app around the corner, you can read the stories you like anytime and anywhere.

If you are a writer who is looking for a platform for storytelling, at Kahaniya you get a chance to not only publish your stories in your regional language but also build and engage with your audience and even earn money for your work.

Kahaniya developed a micro payment system wherein authors can independently define the price of their stories. However, such price must be within the range defined by Kahaniaya – anywhere between 1 and 5 Kahaniya Coins. Each coin is worth INR 1, for users in India and USD 0.1, for users outside India. So, if a writer wishes to charge for his/ her writings they can charge anywhere between 1 to 5 Kahaniya coins. An author can even publish an entire book by using the “Series” feature and charge readers a different price for each chapter of the book. According to Pallav, Series has been introduced to allow writers to continue a story while adapting feedback from the readers.

Kahaniya is a huge bet on the growth of regional language users on Internet and the lack of time/patience that people have on the web. It is a platform that connects both the readers and the writers. Today, it is the only self-publishing platform for regional fiction on the Internet. It provides a complete ecosystem for writers as well as readers. Go ahead and read away!