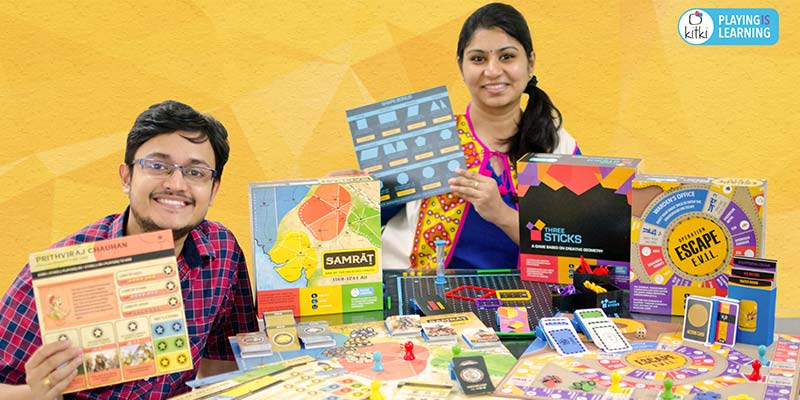 The success story of a couple from BITS who pulled off a campaign for building board games
As kids, all of us wanted to stay at home every day and play games. We would come up different reasons to convince our parents to not send us to school. Sometimes successful and most of the times failing this attempt, I am sure all of us definitely have this one common memory.

With globalization and global technology entering the educational arena, not only is the education system experiencing a huge transformation, but also the way children are looking at and grasping things is changing at a rapid pace. The introduction of e-learning has turned sides, and today’s smartphone generation children have attention spans of less than 15 minutes.

In foreign countries, the education system is much more advanced than the Indian system. If we wish to change the Indian education system, we must first begin with unlearning all the philosophies that we live by. Keeping this geographical difference in mind, Pramod Ponnaluri and Rohini Deepthi Natti, a husband and wife team from BITS Pilani came up with Kitki – a way of changing learning perspectives.

“We believe learning is an absolutely fascinating experience, and at Kitki, we find ways to let children realise that, and Kitki is starting to do this through the use of innovative board games,” says Pramod. They observed that kids who want to stay at home, love whiling away the time by playing games. Board games are the best option to keep kids engaged in productive things. Using this as their strength, the couple came up with the idea of Kitki – which has in it innovative board games based on concepts that children usually learn at school. So, in short, to play this game, kids will need a little knowledge of basics of different subjects, for which they will have to attend school. Thus, Kitki is a fun and innovative way of sending your children to school.

The origin of the idea came from Pramod. As a child, he hated going to school. “I was one of those kids who hardly paid attention in class. And when it came to tests and exams, I used to memorize the textbooks and regurgitate them during the tests. No one really cared, as long as I was getting good grades,” he says. “I wished that I could go back to school and learn all over again, but this time with a renewed sense of appreciation for learning,” he adds when he grew up and joined the corporate world.

Till date, Kitki has under it 3 board games. One is called the “three sticks” which is based on geometry. The next game is “Operation escape” which has a little bit of chemistry in it. The latest game in Kitki is “Samrat” which uses Indian History as its base. These games were all pre-tested before the duo started searching for vendors. They played the game themselves and when the end result of the game was positive, they began spreading a word about it. Luckily for the couple and Kitki, they found sufficient vendors and sellers to sell this game amongst the right audience.

“While I usually handle game ideation and mechanics, Rohini takes care of bringing them to life with thought-provoking artwork. The core team is still just the two of us, though we often take help from interns and volunteers. For helping us with ideas and plans, we have our mentor, Kavikrut, who, incidentally, happens to be a Harvard graduate,” says Pramod.

As far as distribution is concerned, the duo is looking to market these games through both online and offline channels. “Our game on geometry, Three Sticks, is already available on Amazon and eBay. The Kitki team has orders for Three sticks from across 16 countries in the world. We will soon also be selling through branded toy/book stores such as Hamleys, Crossword, Landmark, etc. We also have a plan to approach schools directly – as a secondary distribution channel,” says Rohini. Since Kitki has already tested the interest in the international market, they are in talks with some potential partners who might take up the distribution rights for the US market.

The main aim of this innovation is to change the way Indian parents perceive learning away from school. They also want the kids to use their free time effectively and grasp all-important basics all life so that when they turn to the big world outside, they have a strong foundation that will help them build their career.
“Once we streamline the sales and marketing channels, we look forward to making more such games on a wide range of concepts – from academic subjects to career choices to global issues,” says Pramod when asked about the future of Kitki.

So if you have kids who don’t wish to go to school, you now know what to give them.