Did you know that Sir Richard Branson’s first successful venture was a student magazine called the Student ?

And that was the inspiration behind Stumagz, a Hyderabad based startup bringing students, colleges and corporates on a common platform to create a digital campus ecosystem .

After being featured on Forbes Asia 30 under 30 list this year, Stumagz cofounders Charan and Freddy wrote to Richard Branson thanking him for inspiring them and sharing with him the news of their feature. While Sir Richard Branson not only replied to their email, but also tweeted about them wishing them the very best! 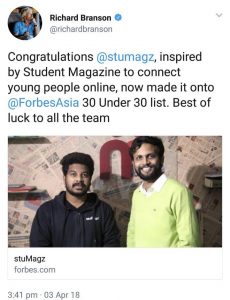 Student was launched in 1968 from a basement in London and it gave a voice to young people. Stumagz has students from over 200 colleges across the country voicing their opinion about different issues. Anyone who meets the Stumagz team will definitely agree that the energy the team shows is contagious.

Charan says that this recognition from Sir Richard Branson is no less than any global award for the them and that he was very generous in tweeting about them. We totally believe that this is just the beginning of grander things that will happen. Good luck, Stumagz!