A cab company recently came up with an amusing advertisement where they have shown the pitiable situation faced by most of the people today while going for work. It shows how people have to keep waiting for cabs, buses, etc. which is a common scene especially in IT hubs of India like Hyderabad, Bengaluru. While many employees travel uncomfortably, most of the cars have only one passenger. Mr.Rahul Jacob had an epiphany when he noticed this situation and thus ‘RideIT’ came to being, which is unique way to make traveling to work affordable and convenient. This sharing is not restricted to just private cars but also includes bikes, cabs, etc.

Hyderabad based technology Start-Up, RideIT is an inter-company service for employees to share their rides. It is a platform for carpooling, through which an employee with car can offer lift to a colleague in same residential area. It is a for-profit social initiative. Any major company is offered their service for free on condition that they promote carpooling within their organization. Also, private solution is provided to big corporates if they want an exclusive platform. 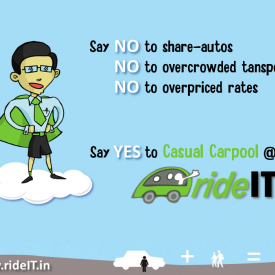 Carpooling is very simple with RideIT. It can be done in following 3 simple steps
1. Choose type of Carpool

a. Regular: Daily Carpool
b. Casual: One-time Carpool
c. Auto/Cab: To find colleagues to share an auto or cab on a particular date.

2. Search for you route in the carpool search box.

3. Connect with other carpoolers.

Carpoolers are matched based on routes rather than start and end-point of journey so vehicle can be shared among users who travel between any points on that route ans so there is more possibility of finding suitable carpool partner.

RideIT kills three birds with one arrow. It addresses problems at 3 levels:

Awards and Recognitions
Since its inception in 2013, rideIT has grown at a breakneck pace. It had a pilot launch with 18 IT companies in Hyderabad including giants like TCS, Infosys, etc. and has now 44 companies using its platform with over 6500 registered users. The brilliance of this concept can be easily comprehended from the fact that they have received accolades as one of the best social initiatives by World Summit Awards Network (Asutria), Unilever (in partnership with University of Cambridge, UK), Microsoft (India) and Ohio State University, USA. They have even received funding from Microsoft and Ohio State University for the same. Recently they won the award for “Best Start-up at Consumer Early Stage” at HYSEA Annual Summit and Awards.

Future Prospects:
As a part of future prospects, they plan an expansion to other major cities in the country including Bengaluru, Pune, etc., and also intend to develop a mobile app (iOS and android supported). For safety of women they have also provided an option to limit the search of carpool request to same gender. At current rate, rideIT is something to look out for in future.

For registering visit the site: https://www.rideit.in/ 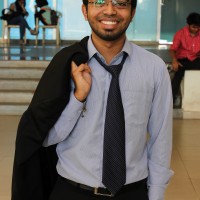