RideIT raises $110K in angel round

RideIT, an inter-company ride matching service for employees has just announced its funding news a few days back. It has been reported that they have been successful in raising $110k as funding from an undisclosed angel investor.

With Rahul Jacob as the CEO and Genoveva Galarza as the CTO, RideIT provides a platform to customers through which an employee who has a car can offer a lift to a colleague who is travelling in the same way. Thus, this platform ensures travel in an affordable and convenient manner for both the car owners and others requiring rides.

From a two people led startup to a team of 8 , this company was incubated by Unltd Hyderabad. Today this startup is a corporate carpool community of over 12,900 registered users from over 70 companies. The platform is now facilitating an average of 45 new carpools a day (on weekdays) in the city.

“The idea came while working with Infosys, where I noticed that most cars had only one passenger (owner) whereas there were many employees who travelled uncomfortably in share autos and buses. This gave us the idea to create a platform where employees can find colleagues and carpool. This allows them not only to save money but also contributes in reducing traffic and pollution.” Says the proud CEO of the startup.

The team plans to use the funds for team expansion so that their services can cover the entire city. Once the entire city is covered, RideIT aims to expand to other cities. A majority of the funds will be  used in product development and marketing.

When one combines the total experience of all the 8 members of the team of RideIT, it sums up to a total experience of 33 years with former employees from Redbus, TinyOwl, Quarizmi (Spain) and One97 Communications. The startup is also the carpool partner for Car Free Thursday movement, an initiative by HYSEA and the Government.

Congratulations to the team for the success of this funding, and we hope you are able to expand the operations as far and wide as possible. If you are an android user, you can download the app here. 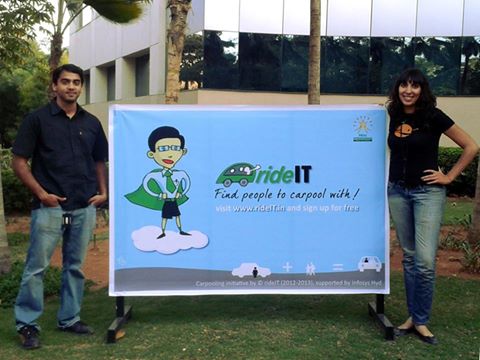