When you hear the term “wearable,” you probably think of wristbands, such as the Fitbit or the Apple Watch. In reality, these devices represent only a small portion of an increasingly diverse sector.

There are augmented reality headsets, such as the Microsoft Hololens, interactive textiles like the conductive yarn that Google’s Project Jacquard is developing for full-body monitoring, and hearing devices such as Eargo, which raised $13 million from Maveron and others in June.

Venture Capitalist Investors have spent nearly $2.6 billion backing 138 wearable companies since 2008. Over half of this total ($1.6 billion) has gone into 45 California-based startups.

Between 2013 and 2014, venture funding for wearable companies nearly tripled from $361.5 million to just over $1 billion. While this is primarily due to Magic Leap’s two funding rounds that alone total $592 million, other notable fundings include Athos’ $12.2 million Series B led by DCM Ventures and Misfit Wearable’s $40 million Series C led by GGV Capital. 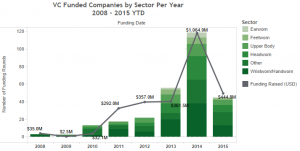 As per the US based startup data wristbands and hand-worn devices have attracted the most attention (and money) from venture investors with over $1.1 billion for 46 startups. Head-worn products follow close behind with over $1 billion for 32 companies. In addition, there is a substantial category of “other” wearable-related technologies: 37 companies developing sensors and applications to enhance broader connectivity. 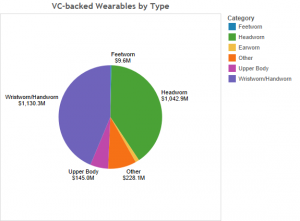 True Ventures, Founder Jon Callaghan and Khosla Ventures, CEO Vinod Khosla are the most active investors in the wearable space, with six investments each.

Although wrist-worn wearables have attracted the most VC interest in terms of number of rounds, six of the top ten companies with the most funding are actually developing products that seek to interact with other parts of the body.

Fitness wearable devices may have served as a test case for the consumer market to gauge sector viability — there are more than 24 fitness wearables startups launched since 2006, which have raised a total of over $1 billion.

Related articles across the web

A Certified Six Sigma & ISO 9001:2008 Lead Auditor Certified by Bureau of Indian Standards. love to work for technology based companies and help them to grow with suitable strategies. A year already at Hyderabad Startup Ecosystem being a part of Startup Weekend, Founder Institute and CIE IIIT-H Incubator and deliver my expertise and working on startup ecosystem to the next level.