Viral Bolt- App that lets you earn while you share!! - Start-Up Hyderabad

Viral Bolt- App that lets you earn while you share!!

The focus point of businesses having an account on Facebook, Twitter, Google+ and other social media, is to drive customer engagement, increase revenue, and of course to socialize. How cool would it be have an app that not only assists in attracting businesses customers but also help individuals earn money by sharing on their social media accounts?!

Viral Bolt is a mobile app that helps businesses find customers in the area of their business premises. Taking social media marketing to another level, this app helps businesses create campaign for Facebook, Twitter, and Google+. Advertisers (or businesses) create campaigns in the app, select a radius (the radius around their business center where they would like to target customers), and decide on a reward amount. This reward, which can be as less as 10 cents, is the amount that businesses will have to pay to each person, who shares their campaign on social media sites. Once the campaign is ready, it will be visible to people who have downloaded the app. 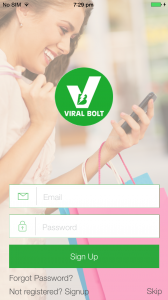 This app is the brainchild of Ayyappa Nagubandi, who has been incubating startups for over a decade, and has authored more than 9 patents in the past 10 years. “It is important to consider the influence that marketing has on developing your business. While there are tools and methods available for large businesses with a wide presence, there is practically nothing for local businesses and for large businesses to target local customers. According to Forbes, 81% of social media users indicated that friends’ social media posts directly influenced their purchase decision. Hubspot says that consumers are 71% more likely to make a purchase based on social media referrals, and according to a research conducted by SproutSocial, out of 53% of consumers who said they use Twitter to recommend companies or products in their tweets, 48% bought that product or service”, says Nagubandi, highlighting the importance of social media for businesses.

Speaking about the app, he said, “Viral Bolt is a mobile app that helps businesses find customers in the area of their business premises. This app takes social marketing to a new level. This app helps businesses create campaign for Facebook, Twitter, and Google+.” The Android version of the app can be downloaded from the Google Play Store. 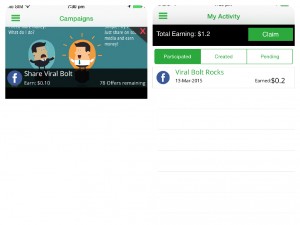 Individuals will have to create an account, browse through all the campaigns available, and then can select the ones they like and share them on their social media account. Each campaign will have a certain reward amount that will be credited to the person’s Viral Bolt account on every share. They will be able to claim their winnings once they accumulate $25.

This app is the first of its kind in the country and seems poised to take marketing and the use of social media networks to a new high.

The link to the Viral Bolt app(android) : https://play.google.com/store/apps/details?id=app.viralbolt.psbl&hl=en 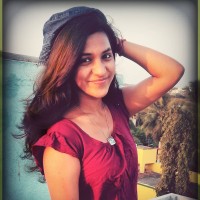