India has been a developing country for decades now and one thing that is moving slowly is the acceptability of women to be equal to the other gender of the society. In most of the villages in our country, even today, women are prone to gender based violence and lot of restrictions.  Now with the society at one side talking about growth and globalization, is it fair for women to still face gender based inequality?

It is astonishing that reports say that 65% of Indian men believe women should tolerate violence in order to keep the family together, and women sometimes deserve to be beaten. Violence Against Women (VAW) is the leading cause of death among women between the ages of 16 and 44. It is a fact that one in every three women worldwide have experienced violence – could be either physical, sexual or in any other form. Nearly 70% of women in India face some form of domestic violence says the Dasra Report. Despite its prevalence, the main problem is that VAW is one of the most under-reported crimes in the world—this makes it harder to estimate the scale and nature of the problem. In India, the reporting rate in some areas is as low as 1%. VAW doesn’t just take lives; it breaks a woman’s self-confidence, leading to depression and fear. She is physically, emotionally and intellectually weakened.

This is where this amazing organisation called Zariya comes into picture – to help such abused women with legal and counselling needs.  Zariya is an Urdu word which means ‘medium’ or a means to reach the end. This is a free service that addresses legal and counseling needs for women who are survivors of gender based violence. With their easy-to-use, secure website as well as their hand-picked reputable partners, Zariya provides women with all the resources that they need in their journey of rehabilitation. With Zariya, a survivor can easily and anonymously file a report and connect with an Advisor in a time-sensitive manner. In doing so, Zariya provides the resources needed to end abuse and overcome a traumatizing experience. 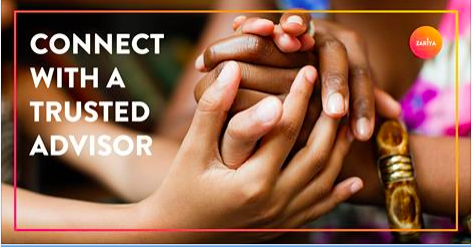 “Why is VAW under-reported? Due to fear, stigma and inaccessible procedures, most women endure abuse in silence. There is a need for a survivor-centric process that makes reporting and help-seeking easier, less compromising for a woman’s identity and more safe. This is where Zariya fits into the equation; we seek to break this silence and end the cycle of violence.” Says the team of Zariya.

The empathetic listener is a trained counselor from an NGO service provider within the Zariya network. Currently, the Zariya team is conducting a pilot with one NGO partner (the MyChoices Foundation) which operates 4 counseling centers in Hyderabad and are looking to continue growing this network. In Hyderabad, they are currently onboarding other partners such as Sannihita, Help Hyderabad, and Bhumika Collective among others — all NGOs that work in the anti-VAW space.

This amazing step was taken by Sahar Khan, an alumni of Stanford. She completed her Pre – law from Cambridge last year and has professional legal experience working with survivors at an NGO in Mumbai. Apart from Sahar, the team consist of  Arzav Jain (Stanford CS, BS ‘15 and MS ‘16), Kanhika Nikam (Stanford Graduate Design Program) and Abraham ( a writer by profession and a graduate in psychology) who work on the technology, design and more at Zariya. Arzav is passionate about using technology for social good and has volunteered for non-profits as a developer in the past. His past professional experiences include software engineering at Wunderlist, Sift Science and Palantir. Kanhika specializes in designing for social innovation and has previously built a low-cost therapeutic game to help children with hearing disabilities learn new languages. Also, Japsimran Kaur is currently a Human Biology major with an academic concentration in women’s & children’s health. In Hyderabad, they have Priya (IIT student in CS) and Maya, an IIT PhD student of Health Psychology who is also a certified counselor.

“Currently, we are surveying the terrain via the internet-connected and urban users of Zariya to understand the problem better. There is a promising trend with the growing penetration of feature phones and smartphones in India. Interactive Voice Response (IVR) systems for the less literate, a mobile app for smartphones and SMS mechanisms for feature phones are all part of Zariya’s long-term vision. We are excited about the work we have ahead of us!” says Sahar Khan, Founder, Zariya.

Zariya’s main supporting pillars are their technology security, product design, uplifting UI/UX and high-quality content. Their team comprises of diverse students and professionals with interests spanning CS, design, medicine, mental health, law & development.  With their initial target market being Hyderabad, they are striving to provide these services Pan India. In the long term, they plan to extend Zariya to other countries such as Brazil and Pakistan from where they have already received requests for such a service.