Since T-Hub’s inauguration in the city, it has been in the news for all the good reasons. From supporting startups to use that space as a co-working area, to allowing organizers to conducts events and startup gatherings, the technology incubator has been boosting the startup and IT sector of the city.

Now, when it has been flashing so much in the news, how could big giants having Hyderabad as their hometown resist to give it a visit? That’s right. We are going to have the Microsoft CEO, Satya Nadella at T-Hub on 28th December 2015. 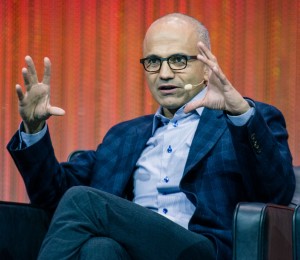 Jayesh Ranjan, secretary for information technology in the Telangana government, told IANS on Wednesday that Nadella will be taken around the facility located at the International Institute of Information Technology (IIIT), Hyderabad.

Nadella is to be in the city, his hometown for 3-4 days in the end of December. He has plans of meeting the state officials during his visit and will be there at the technology hub on 28th December to address budding entrepreneurs as the government has already requested him to be a mentor of T-Hub.

Built at a cost of approximately Rs.40 crore, this hub was launched last month to create the much-needed ecosystem for startups, making it as a platform for technology and business mentorship.
As on date, more than 130 startups have set up their operations at T-Hub, created by the state government in collaboration with IIIT-Hyderabad, Indian School of Business (ISB) and NALSAR University of Law. The 70,000 square feet uniquely designed and fully automated facility has brought together startups, incubators, men and innovation.

It is likely that the Telangana government is to discuss with Nadella the plans of Microsoft to expand its operations in Hyderabad. Jayesh Ranjan will hold preparatory discussions with officials of Microsoft’s India Development Centre here this week.

This will be Nadella’s second visit to Hyderabad after taking over as the head of the global software giant last year. The 47-year-old, during his first visit in September last year, had met Telangana Chief Minister K. Chandrasekhar Rao.

Telangana’s Information Technology Minister K. Tarakarama Rao had also called on Nadella during the former’s visit to the United States in May this year. Microsoft has its India Development Centre here since 1998. It is the largest facility of Microsoft outside its headquarters in Redmond, US.

“Satya Nadella is coming on December 28. He is visiting T-Hub. We are planning to inaugurate some of our initiatives during that time. We are also inviting some other dignitaries. He (Nadella) promised to spend a couple of hours at the T-Hub. He is on private visit,” said KTR.

It is reported that Nadella will meet KTR in T-Hub where he will spend about two hours and will inaugurate some the government’s initiatives. What’s interesting about the trip is that this will be his private visit to India. Moreover, it is not decided yet whether Nadella will meet Chief Minister K Chandrasekhar Rao during his this visit as the CM would be busy in an another programme from December 23 to 27.

With such great progress initiatives by the Government, the visit of such eminent persons will only  boost confidence of entrepreneurs of the city.